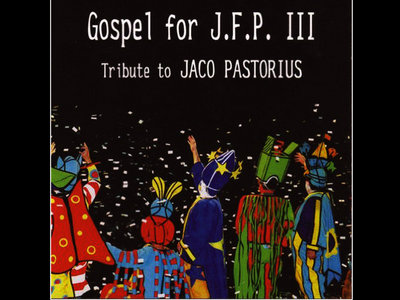 As a musician, John Francis Pastorius III (Jaco) brought change. He boldly took his instrument, the electric bass guitar, to uncharted waters, and an instrument that is commonly placed behind the music, to the front. As a musician, Jaco's talent was not confined to the bass, more than a musician, Jaco was music. The focus of this project, Gospel For J.F.P. III, is on Jaco, the composer, a man with an extraordinary ability to create music. The body of material that he himself composed is not enormous, further proof that less is more, as these compositions rightfully fall into the status of contemporary standards, and sure to pass the test of time. Involved here are many of the musicians that were part of his life, as well as others his music has touched. Needless to say, Jaco's own renditions of his wonderful compositions could never be surpassed, only interpreted, and serve as an inspiration to all those who love his music.

In his relatively short life, John Francis "Jaco Pastorius III not only revolutionized the role of the electric bass, he contributed a small but resonant body of composed work that remains influential to this day. Pastorius is best known for his work with Weather Report and his own Word of Mouth band. The tragedy of mental illness and related substance abuse that would lead to his death at the age of 36 does nothing to diminish the importance of his brief but significant contribution. His compositions continue to be covered by artists like trumpeter Randy Brecker, bassist Christian McBride, and guitarist Scott Henderson.
While Gospel for JFP III is not the first album to pay respect to Pastorius' legacy, it is the first to present such a broad range of interpretation. Unlike last year's Word of Mouth Revisited, which focused more on his virtuosic style with a steady stream of bassists including Victor Wooten, Marcus Miller, and Jimmy Haslip, this recording concentrates more on the writing, finding new and unusual ways of interpretation.

The eleven tracks are mostly Pastorius compositions, although the title track is an original dedication, and the funky vocal track "I Can Dig It Baby is notable only as being from his first known recording date, guitarist "Little Beaver Hale's Party Down (President, 1974). A few particular standouts employ innovative ways of looking at well-known material. The fourteen-piece vocal group Contrafarsa opens the album with a unique choral arrangement of "Three Views of a Secret that ultimately evolves into a duet between electric guitarist Hiram Bullock and acoustic guitarist Birele Lagrene, with the choir rejoining the duo for its triumphant and joyous conclusion. Pianist Michael Gerber retains the airy ambience of "Continuum, but with Romero Lubambo's acoustic guitar, Gil Goldstein's synth washes, percussionist Armando Marçal's light shadings, and Mike Stern's delicately restrained electric swells, the piece takes on an even more ethereal quality.

Steel pan player Othello Molineaux delivers a fairly literal reading of "Havona that is elevated by strong soloing from saxophonist Bob Mintzer and, of course, Molineaux's pans. Drummer Kenwood Dennard's version of "Teen Town opts for a slower, greasier funk, as opposed to the high-octane virtuosity most interpreters aim for. But perhaps the most imaginative interpretation is Gil Goldstein's solo take on "Punk Jazz, where he builds layer upon layer of sound, often processed heavily, to create a unique accordion tour-de-force.

Probably the most surprising aspect of Gospel for JFP III is its general avoidance of virtuosic bass playing. By focusing instead on the myriad of possibilities for interpretation, the album succeeds in demonstrating the true breadth of Pastorius' compositional legacy. Some tracks work better than others, but this mixed bag is nevertheless an essential work whose open-mindedness is perhaps the best tribute possible to an artist who, nearly twenty years after his death, remains a vital and visible influence.

Includes unlimited streaming of Havona (Gospel For J.F.P. III) via the free Bandcamp app, plus high-quality download in MP3, FLAC and more.

ships out within 1 day
Purchasable with gift card